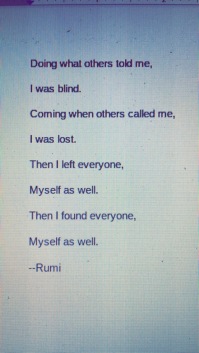 What is wrong with you?

That question cycled through my mind for over forty years.  And the search for the answer fueled most of my major life decisions.  Of course, I wouldn’t have asked the question at an early age unless someone told me or made me feel abnormal.  Some early memories include my mom telling me at age four or five to stop pretending I was walking around in high heels (to which I lied and said they were pretend boots) and the babysitter catching me playing with her daughter’s doll at age seven and telling me if she told my dad he would beat my ass.  Inadvertently, everyone around me created the imprint in my mind that I did not belong; that I was different and something was wrong with me.

This narrative that I adopted evolved into an incessant need for acceptance and approval.  At home, among friends, at church, at work–my level of self-regard hinged on acceptance in the tribe as evidenced by my perception of approval. What I didn’t know then was that every time I asked the question of what’s wrong with me I was approaching the world from a place of inferiority.  This means that I lived a life assuming that I needed to prove that I was normal, and the reactions from others served as my gauge. The sense of belonging made the emptiness inside subside. At least temporarily.

After the marriages, church involvement, college degrees, children and five bedroom house on the corner, I still asking what’s wrong with me?  What was wrong with me that I still felt out of place, still battled depression, still considered suicide, and was still in constant need of outside approval.  That’s when I made the decision to accept the sexuality I knew was true from age six and live my life as an open gay man. Finally I would be free, accepted by the community, applauded for my bravery and live happily ever after.

If I ever felt like I was not accepted or that I needed to fight for approval, it was most brutally obvious with the gay community in Charlotte.  It didn’t take long after discovering Grindr (a “dating” app) and enduring a few interactions with men that I was looking at myself in the mirror and asking what’s wrong with me? I felt like a child who’s big shiny balloon had just popped; all those years I dreamed about “coming out” only to feel worse than I did when I lived a lie. Granted, I approached the community from the same place of inferiority I had always used as my lens, so most of this was self-sabotage.

And then one day, Grindr opened the door into the gay Meth community. I was thrust into a whole new tribe who were actively seeking new members.  Since I had plenty of discretionary income and had learned to use promiscuity as a means of finding approval, I was a perfect match. I was welcomed with open arms and oddly enough, in the midst of active addiction I never asked the question what’s wrong with me.  I had never felt more normal because I was among other guys who were also damaged and searching for those same answers; we all shared an unspoken bond. But, it wasn’t long until my life came crashing down around me and when reality finally set in, I was back to asking what’s wrong with me?

About four months into sobriety, there was a dull, numbing pain that sat like a rock in the pit of my stomach.  It began showing up as I realized that taking the substance away from my life did not fix me. I was broken before I started using Meth, so why would I miraculously be fixed once I stopped?  I felt hopeless as I considered the prospect that I would still grapple with the same issues of approval and acceptance but this time couple them with the challenge of starting my life over from scratch.  How could I have not progressed through all of these years? What would it take for me to change? What is wrong with me?

There was one particularly defeating morning when these questions were swirling around my mind that I decided to attend an AA meeting before my rehab session.  Per usual protocol, I introduced myself to the group as an alcoholic-addict. But something about that statement didn’t set well with me once the words left my mouth.  Was this the label I was to identify with for the rest of my life? Was I destined to forever sit in a circle and lament about my disease? Being an addict seemed like such a small part of the overall hurt inside.  Actually, it didn’t feel a part of the hurt as much as a product of it. Again, I left the meeting asking myself what in the hell was wrong with me?

An hour later I sat staring at a worksheet the treatment counselor had given me.  I felt as if my world was crashing down around me once again. The feelings of hopelessness and overwhelm was making it hard for me to breathe.  Deciding to push it all down for the sake of getting through the session, I rolled my eyes and began the worksheet. The activity was a problem-solving exercise that asked “why” five times to get to the core of a particular problem.  At that moment, the issue on my mind was I don’t want my identity to be equated with the word ‘addict’ for the rest of my life.  So, then I began the why’s:

And so, through discovery work, I unraveled the driving force behind my foray into drugs.  I’ve written about this before in previous blog posts,  but it bears repeating.  There was a raw, liberating power that was unleashed once I realized the core issues that lead to active addiction: I was told that I had to be something different to be accepted and I never felt approval from those who meant the most to me.  Having that answer unlocked the secrets to my entire life, enabled me to truly understand myself, and to feel like I had finally made measurable progress. From this, hope was born.

View all posts by dallasbragg

One thought on “what is wrong with me?”